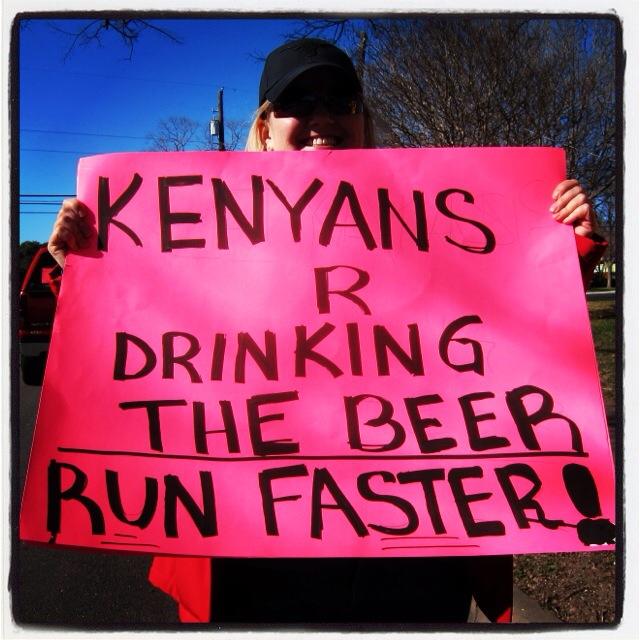 Often I read an article and wish that I had written it myself, because it makes me laugh, or smile, or is particularly well written. I wish I wrote the following article because, aside from being well-written and humourous and making me smile, it echoed my thoughts exactly. I wish I wrote it because it was everything I wanted to say, but couldn’t put the words together. I think I was one of the runners that Erin talks about – the kind who spent the day wandering around in a daze when they heard about the events that unfolded at the Boston Marathon this year. I spent a large portion of last year trying to qualify for this year’s race, but by God’s grace, I didn’t  get a qualifying time until the canberra Marathon, Sunday 14th April – the day before the Boston bombings. I was at a loss for words, which is why I was so pleased to come across this article, which seemed to say everything that I wanted to.

The original link is posted at the bottom.

The People Who Watch Marathons – By Erin Gloria Ryan

Yesterday, when attacks on the Boston Marathon injured scores of people, mostly spectators, every runner I know spent the day wandering around in a daze, then either going on an angry run or curling up in the fetal position at 9 pm. The spectators — people who show up and cheer with noisemakers and high fives and encouraging cheers and magic-markered tagboard signs that read “YOU ALL ARE CRAZY! KEEP RUNNING!”— are the people who matter most to runners. Without those people, a marathon would just be an exercise in self-abuse from a large group of crazies. But there is meaning in marathoning: the people who watch.

Running can be a lonely sport — hours on the road solo at times so early people can still be seen stumbling out of bars and hailing cabs home, declined invitations to evening activities, neglected significant others, and truly disgusting feet. In fact, unless a runner trains with a group that doesn’t annoy the living daylights out of them, the months leading up to a long race can be profoundly antisocial. But on race day, all of that disappears when, as the marathon runner embarks along a path lined with people — all kinds of people, they’re bathed in the encouragement of thousands of people who cheer for them without knowing their names.

It’s even common (albeit debatedly cheesy) for marathoners to iron their first names onto their raceday shirts. This isn’t so their wasted bodies are easily identifiable in the medical tent when they’ve run so hard they can no longer speak (that’s what race bibs are for). It’s so marathon spectators know how to encourage them accurately. When I ran the Chicago marathon in 2010, I didn’t iron on my name, but that didn’t keep this group of people who had roused themselves from bed and skipped brunch to watch 40,000 carb loaded runners stagger for 26.2 miles from yelling words of encouragement to me, a stranger, on that 80-degree day. “Come on, pink shirt!” “Pink tank top way to be! You’re almost there!” Some yelled the number on my bib. Then, after I’d pass, they’d cheer for the next runner to approach that they’d never met.There’s a woman who used to hand out homemade Jello shots to runners at mile 23 along the Chicago course, which sounds gross, but actually turns out to be the perfect combination of cool carbohydrates and enough alcohol to take the edge off the tiniest bit. In Boystown, burly men twirl prop guns on a stage off Broadway, and in Pilsen, a mariachi band plays while ballet folklórico dancers twirl. Spectators even spread out along the lonely stretch between miles 18 and 21, standing in the sun with signs far from any train stations. All for people they’ve probably never seen, and will probably never see again.

And runners know the feeling of hearing their friends or family shout their name as they race is almost as good as the feeling of crossing the finish line. I once ran an 8K in Chicago after being sick for two weeks, and at about the 5K mark saw my then-boyfriend standing there in all black, looking completely out of place and awkward but coming to life when he saw me. I ran over and high fived him. It kept me going. Another time, during a 15K, a lone man dressed like a cheerleader along the lakefront path in Chicago was customizing cheers for runners he saw. During the Chicago marathon in 2010, people who lived along the route came outside with garden hoses and sprayed us to keep us cool, and my mother jumped in and ran from miles 21-24 with me. I don’t know if I could have finished if she hadn’t been there, if all of those people hadn’t been there. Very few runners could.

In his excellent piece for The Nation yesterday, Dave Zirin invoked a famous quote from women’s marathoning pioneer Kathrine Switzer: If you are losing faith in human nature, go out and watch a marathon. As a runner, I know this to be true, but not because of me or my fellow standard issue runners. It’s the spectators — who yesterday after the blasts, jumped over barricades to run toward the injured, who helped the few remaining volunteers at the event throw tables out of the way to make room for ambulances. It’s the people of Boston who offered their homes to families stranded by the blast — the last I heard, the Google doc of open doors contained 5,000 entries. For strangers. From the people who watch.

One of the many puzzling aspects of yesterday’s attacks was the question of what, exactly, the perpetrators thought they’d accomplish by targeting what basically amounts to a celebration of human tenacity. If anything, the tragedy in Boston will further solidify the bond between runner and spectator. And when the Chicago marathon happens this October, I’ll show up to run harder, and they’ll show up to cheer louder. If anyone thought this attack would discourage the runners or the watchers, they’ve clearly never been to a marathon.

3 thoughts on “The Article I Wish I Wrote: The People Who Watch Marathons”