Marathon day eve started just like any other… With a parkrun. 5 cruisy kilometres to make sure the legs were still functioning after what had been a very light week of running for me, then it was time to drive down to Sydney with my marathon partner in crime, Pip.

First stop was the race expo, to pick up our race numbers. The expo was moderately disappointing… It was mostly just stands of the minor sponsors (asics, rebel sport, etc). We had been keen to look for Zensah calf sleeves  and injinji toe socks, but they weren’t there. Hunter Valley marathon had more variety at their event expo.

Next stop: Sushi Train. Mmm, carbs. We resisted a final plate, in favour of heading to yogurtland to load up on frozen yogurt, chocolate flakes and fruit. The eating done, it was time to hit the shops.

The Asics store was next. I had had my eyes on a pair of the Hyperspeeds since the City to Surf over a month ago. I tried them on, along with a pair of the Asics Gel Lytes, that also caught my eye, in all of their bright pink glory. The sales guy told me, “you’ll get 400km out of these babies”… Um, thats’s about a month of running. Oh, he said. Lucky i am light, with an efficient stride, so I tend to get a little longer out of my shoes. I also have quite the shoe collection now, so I can alternate.

Life is full of tough decisions. Like, choose just one pair? Or take both? I took both. Then it was off to Lululemon, where for  once, I didn’t buy a thing! We ran into Cheryl and Vlad at Lululemon too. Then it was time to head to my friend’s house where I was staying the night, in Waverton, conveniently located only 2 train stops from the start line in Milsons Point. As I was going to bed that night, I put my garmin on to charge, as well as my iphone. There was no powerpoint in my room, so I left them in the kitchen. With no iphone, I set the alarm on my ipad for 5am, and turned in for a solid 8 hours.

I woke early the next morning, and thought, surely it’s nearly 5am. I checked my ipad. 5:04. My alarm failed! Thank god for an efficient body clock. It always seems to know to get up early on a Sunday (even when I don’t want it to!)  I had a peanut butter sandwich and an apple muffin as I got dressed. I was more than tempted to lace up my brand new shoes. however, Pip and I had planned to run the race together, and had already agreed on co-ordinated outfits. My shoe choice for the day was based purely on aesthetics.

I headed to the train station.  Pip found me on the train. We arrived at the Start line about an hour before our race. The half marathon was just getting underway. I had a banana and some preworkout/caffeine, and we were interviewed by the Blackmores ambassador from Thailand, for Thai TV! 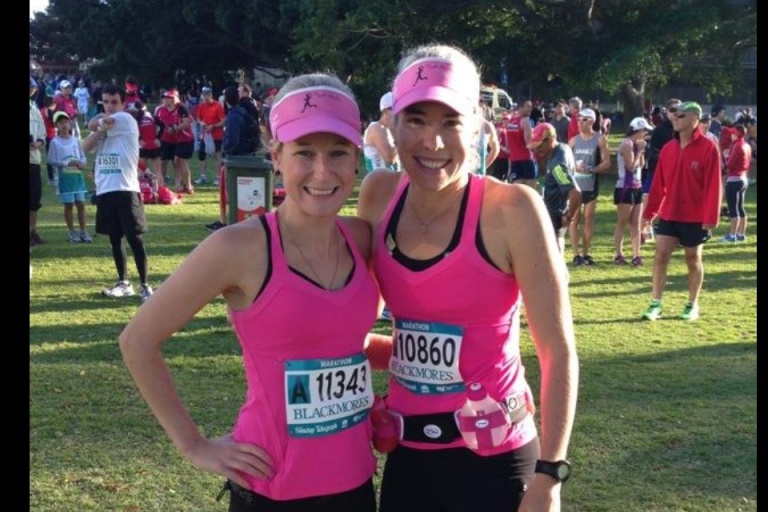 Soon enough, it was time to take our place in the start chute. Pips brother Dave was running the marathon too, and we started near him. I didn’t even hear a gun go off, the crowd just started moving forward, and we moved with them.

Pip had a goal of running around 3 hours 40 minutes, and I was there to pace her. This meant that we would have to average about 5.13 per kilometre. We had a few sub-5 munite k’s in the first 5 or 6km, but that was ok, because these were easy, downhill kilometres. i was not concerned that we were going out too hard at all.

As we ran across the Sydney Harbour Bridge, I spotted Ray “The Eagle” (mentioned in my previous blog posts, the Hunter Valley Marathon and The Mudgee Marathon). He must be close to marathon #170 by now! We surged a little, and ran up and said Hi.

When we got to the 8 or 9 km mark, we started to nail nearly every single kilometre at our goal pace. On the uphill we slowed a little, but made it up on the downhill. We were running with consistent effort. At the 15km mark, I asked Pip how she was feeling. She wasn’t feeling amazing, a little worrying for that stage of the race. But we continued to nail our goal pace for the next 15km.

We ran through Centennial park, through ‘the labyrinth’ where the course loops back and over and around and you have no idea where you are, or if the runners on the other side of the path running in the other direction are ahead of you or behind you. We were cheered by many random strangers for being dressed so brightly, and by Pips Dad. We made the final turnaround, and headed back towards the city.

Soon, the wheels started to fall off. Our kilometres blew out to 6 minutes. I tried to keep saying encouraging things to Pip, like “PB’s aren’t meant to feel good”. She kept responding, “I know!” I was not sure if I was being helpful or not.

Pip wanted to walk through the water stations to fill her water bottles, So I took them and filled them for her. Since we weren’t moving fast, I took the opportunity to take lots of photos, and send texts to some of our friends at the finish line, saying we would be there soon.

Coming around the corner to see the Sydney Opera House was certainly a sight for sore eyes, and sore legs. The finish line was within reach. This stretch of course is lined with race photgraphers, trying to capture shots of runners with the iconic Harbour Bridge or Opera House in the backround. i knew this, and I tried to put my best race face on. But there were so many, they still caught me unaware! I was looking around for Pip, not for the photographers.

Coming up the finish chute was awesome. This would have to be the best marathon finish line in Australia. We had so many cheers for the ‘pink girls’ and there must have been plenty of people from Newcastle there, because I heard our names called several times. I caught a few faces, but not all. I grabbed Pips hand, we threw our arms up in the air, and crossed in 3:51:13, a 2 minute PB for Pip!

It was a hot day… Great for spectating. I enjoyed the finish-line atmosphere for awhile, before making the long journey to the baggage collection area. After that, I chilled out under a tree in the shade for what felt like 2 hours, then it was time to head home.

Big thanks to all the people who cheered on the course, I don’t think I have ever felt so much support in a marathon before. Thanks to Pip for putting up with me for the whole journey. I thoroughly enjoyed every minute,every kilometre. This was the first marathon I have ever run, where I didn’t think, “why do I do this to myself?” Not sure if Pip felt the same.

Well done to all the ither runners, particularly to all those in their debut marathons, and those who ran PB’s and negative splits. Too many to mention by name, but it was great seeing you all on course. High 5’s give me energy! (Can’t forget Vlad Shatrov – supercoach! On the podium, 3rd place in the half marathon.)

7 thoughts on “The Blackmores Sydney Marathon”