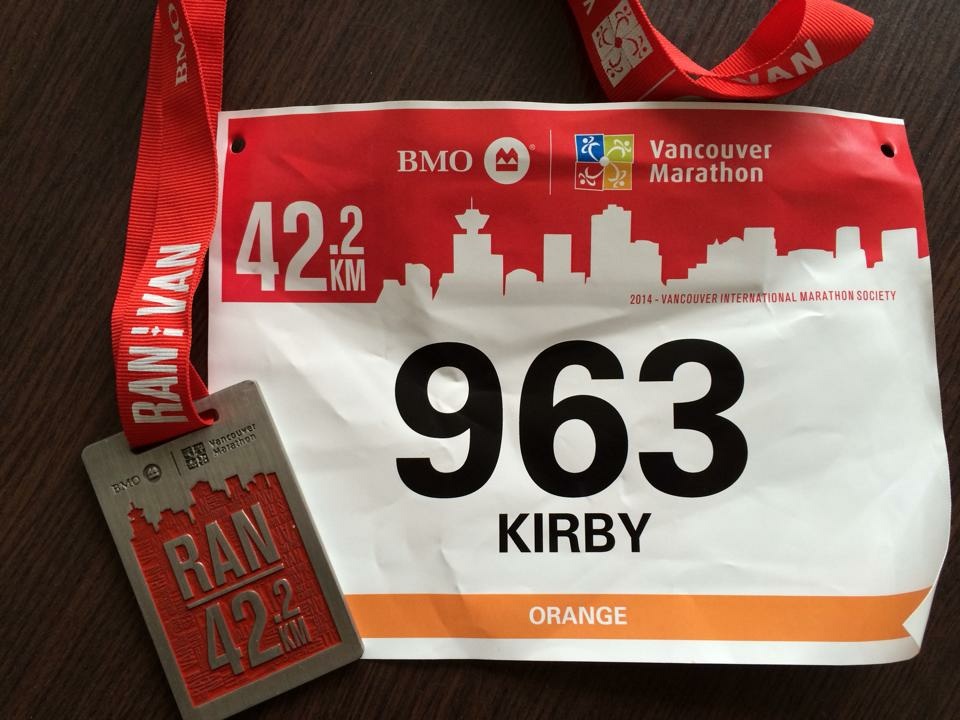 Boston was a long way to travel for one marathon, so while I was over here, I decided to see what other marathons were on. I saw that the Vancouver marathon was on 2 weeks after Boston. Although it was on the other side of the continent, I decided it would be a good race to do, because I lived in Vancouver in 2009-2010, and still knew plenty of friends in the city.

I called up my friend Lee. She and I did the Victoria Marathon together in October 2011, on Vancouver Island, BC, Canada. It was the first marathon for both of us. And while the Vancouver marathon would be my 18th, it would be Lee’s second marathon. I agreed that we would run together.

I arrived in Vancouver on the Thursday before the race. The sun was shining, the weather was beautiful. English Bay was crowded with people enjoying the sun. I was wearing shorts, and told everyone I was not coming home.

On Friday, I played tour guide to Neil, fellow Runlabber who is over here running 3 marathons on 3 consecutive weekends, Boston, Big Sur, and Vancouver. The guy may be crazier than me. We visited Grouse Mountain, saw the bears, rode the aquabus to Granville Island, visited Sea Village, sampled beers at the Granville Island Brewery, and indulged in sour cream glazed donuts, chicken wings and yam fries at English Bay. It was a perfect Vancouver day.

on Saturday, I visited the race expo. I bought a new Garmin 620, a pink fuel belt, and lots of GU. That evening, I met Neil at the Old Spaghetti Factory in Gastown for some pre-race carbo loading. on the way home we stopped at London Drugs and each bought a box of Clif Bars… At $1 each, they are so cheap here! I laid out my things for tomorrow, and went to bed.

Race Day… My friend Sam, who I am staying with, came home from work at the bar at 5:30am and woke me up. Perfect timing. He told me it was pouring rain outside. No! Whatever happened to my perfect Vancouver weather?

I walked up to Tim Hortons on Davie Street, where I had a bagel for breakfast, and waited for Neil. We caught the Skytrain to Oakridge, and walked down to the start line. It was still raining. Not even the fine misty rain that I am accustomed to in Vancouver, but actual, real rain. Plastic bag fashion was everywhere. People were wearing big plastic bags, little plastic bags, clear bags and big black garbage bags.  There were even small shopping bags being worn as hats. I joined the club. I checked in my jacket and bag, and picked up an extra clear plastic gear check bag. I made arm holes and a head hole, and pulled it on, trying to keep warm on the cold miserable day.

I was in the Orange group and Lee was in the Black group, but nobody was checking so we both jumped in Orange. The first 8km or so went rather smoothly, and was largely downhill. I helped Lee fill up her water bottles up at the first water station.

We made it to the halfway point in 2:02. Shortly after that, the rain stopped, and the sun looked like it was trying to come out from behind the clouds. It didn’t. The rain started again.

We ran, we walked, we stopped and stretched. I took a twizzler off a girl near Kits Beach, and I don’t even like twizzlers, but that was the best tasting twizzler I have ever had. We crossed the Burrard Bridge and headed towards English Bay. The rain continued. I grabbed as many energy gels as I could from the aid stations.

As we entered Stanley Park, we only had about 10km to go. It was freezing as we ran past Siwash Rock, and the headwind started to blow. I was very thankful for the volunteers at this point, 4000 of them, braving the horrible conditions to be there for us whenever we needed water, ultima, or Vaseline.

We passed the Lions Gate bridge, Brockton Point lighthouse, the 9 o’clock gun and the rowing club. I was giving Lee a running commentary as we went along…. I used to live in that block of units…. I used to work there. I definitely did the bulk of the talking. I’m not sure if I was helping or not.

We turned on to Pender street, and the finish line was in sight. As we crossed, we joined hands and threw them up into the air! We were done, in 4:23:48, a PB for Lee. Sometimes running with a friend is more important and more rewarding than running as fast as you can.

John Stanton, author and founder of the running room, put my medal around my neck as we walked down the finishers chute (I.e. The food tunnel) I got yoghurt, fruit, and a little box of food that was filled with chocolate, crackers, muesli bars and trail mix.

I retrieved my bag from bag check, and promptly got changed into dry clothes, including my Boston jacket, from 2 weeks ago. This prompted a number of runners to come up to me, who had also just done the Boston/Vancouver double, and talk about how crazy we were.

I decided to forgo the brunch that we had originally planned in favour of going home to get warm and dry. Once home, I counted my gel stash and headed to Kadoya, where I ate sushi until I could eat no more!