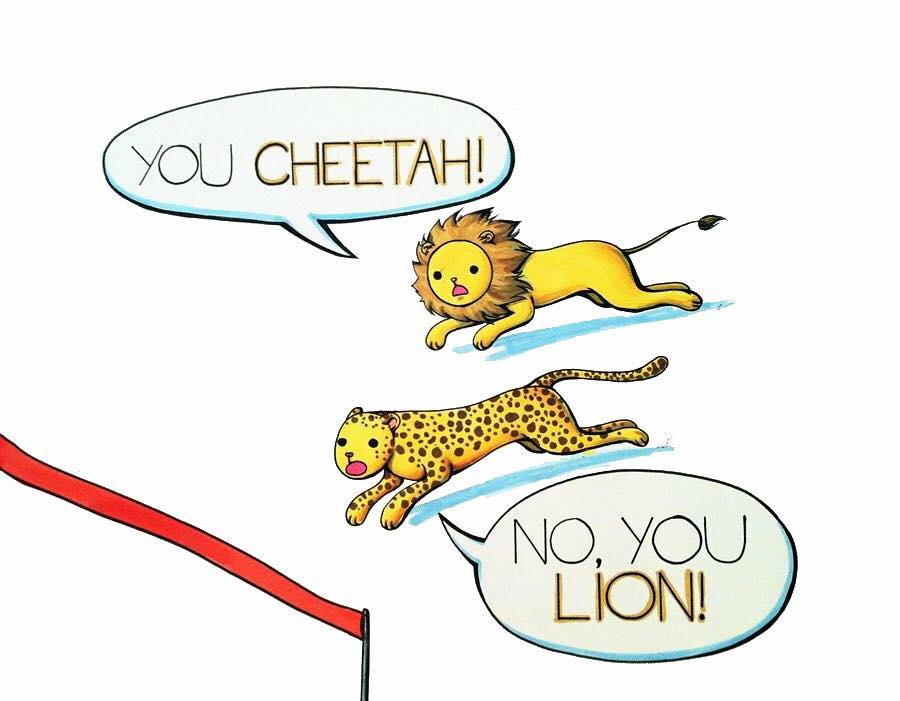 I ran the inaugural Dubbo marathon last year, and It was one of my favourite events of the year. (Read about it HERE).

I came 4th. I thought I was coming 3rd, until I reached the finish line, and the announcer said I was 4th. I ran a 3:27. Afterwards, I said that I was happy with my performance, just a little disappointed that it didn’t win me a rhino.

Richard and Oscar were supposed to come too, and explore the zoo while I ran, but in the end they couldn’t so I roped Jacci and Mim in at the last minute for a girls trip!

On race morning it was chilly, but if last year was anything to go by, when the sun came out it would be hot. We headed to the Zoo, and arrived as the gates were opening. We found Rego and got our numbers, and ran into a bunch of other wooters too. 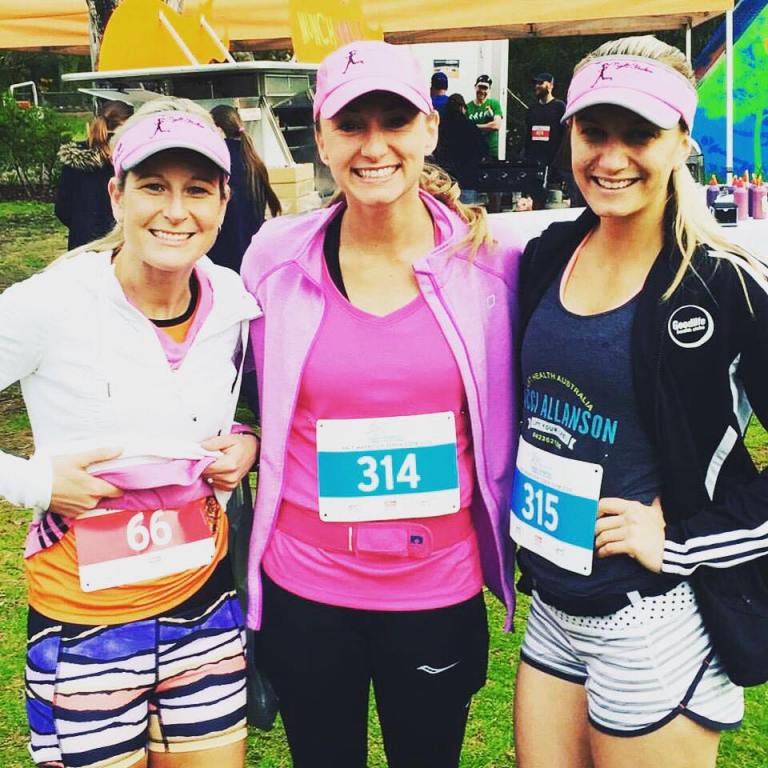 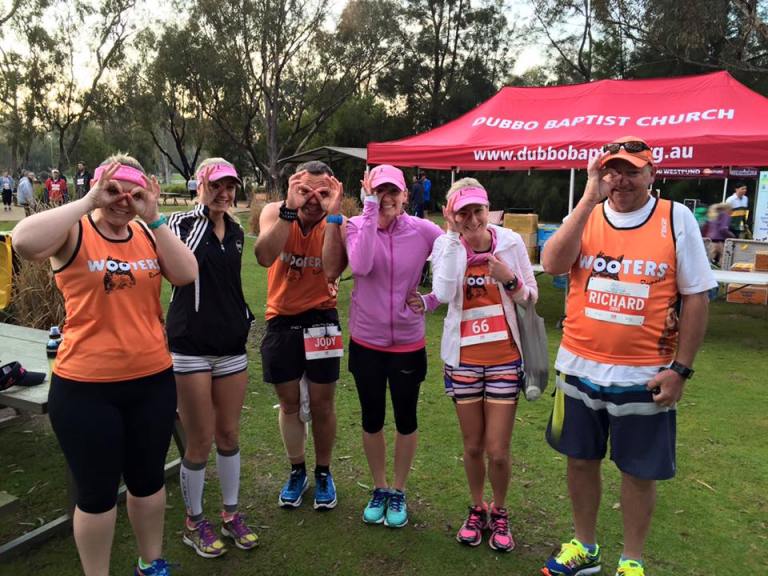 The Dubbo Stampede was made up of 4 races: the Dingo Dash (5km) the Cheetah Chase (10km) the Zebra Zoom (Half Marathon) and the Rhino Ramble (Marathon). Actually, I’m not sure if it was a ramble or a rampage. On the website it said ramble, but on my finisher’s medal it said rampage. To me, it definitely felt more like a ramble. The first 3 place getters in every race got a stuffed animal. I really wanted a rhino.

Before too long it was time for me to head to the start line. As the runners stood in the chute listening to the race briefing, nobody was moving up to the line, so Jody Whitehead and I went and took poll position.

The race started, and I lead for the first 5 metres. Soon, a bunch of runners had passed me. I ran along for the first few kilometres, chatting to those around me. Soon, I was in 4th position. Given my poor performance in Mudgee 2 weeks ago I wasn’t feeling too confident, and if it got too hard, I just wanted to enjoy the race and have fun. But I told myself that if I wanted to be a chance at making the podium today, I better not let the leaders get out of sight. So I stopped chatting, and tried to get comfortable.

I had my first gel at 8km. The marathon course consists of 3 loops. about halfway through the loop, there is a little out and back section of about 200m, which is helpful for keeping track of how far people are in front of or behind you. The first time I ran through this section, I was in 3rd place, a minute or so behind the 2 leading girls, with 2 others not far behind me.

The course wound its way around the river, following the dirt paths. It was very pretty. At the end of the first lap I was coming third. I grabbed my poptop of Gatorade off the special needs table, and took a wristband to signify that I had completed 1 lap.

A couple of kilometres later, I stopped to take a picture of the rock band playing on the side of the road. 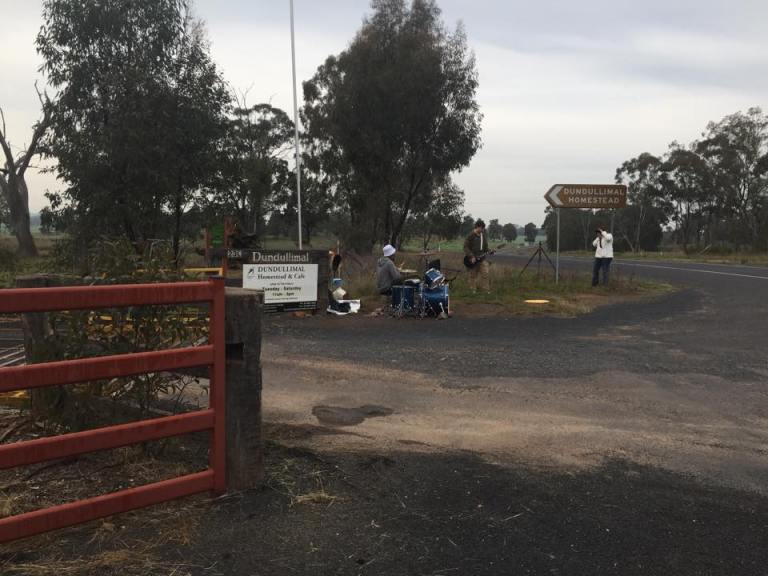 I grabbed water at the next station, and enjoyed the run downhill towards the bridge. Soon, I started to pass the end of the half marathon field. I encouraged them as I passed, not sure how far they were into their race.

Not far before the bridge, I saw Christine, the girl who was leading, walking back. She had pulled out of the race, with an injured foot.

I continued to pass half marathoners, which seemed to make the time go quickly. Soon I came up behind Danielle Whitehead, and gave her a woot as I passed. 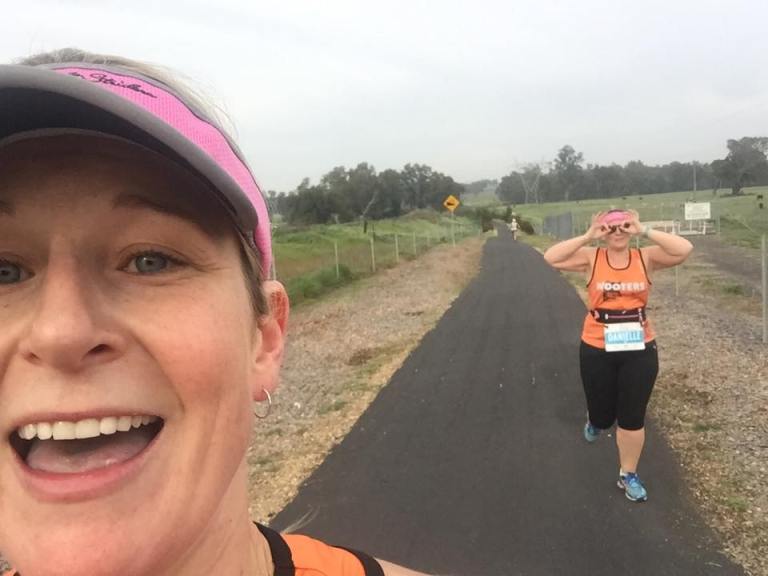 At the hairpin out and back section, I calculated that the lead girl was about 2 minutes in front of me, and there was no one in sight behind. I had another gel and continued on. I was still running consistently, between 4:40 and 4:50 per kilometre. The course was pretty flat with no major hills, just a few undulations and sections of dirt or gravel path.

Soon I came up behind Jacci and Mim… 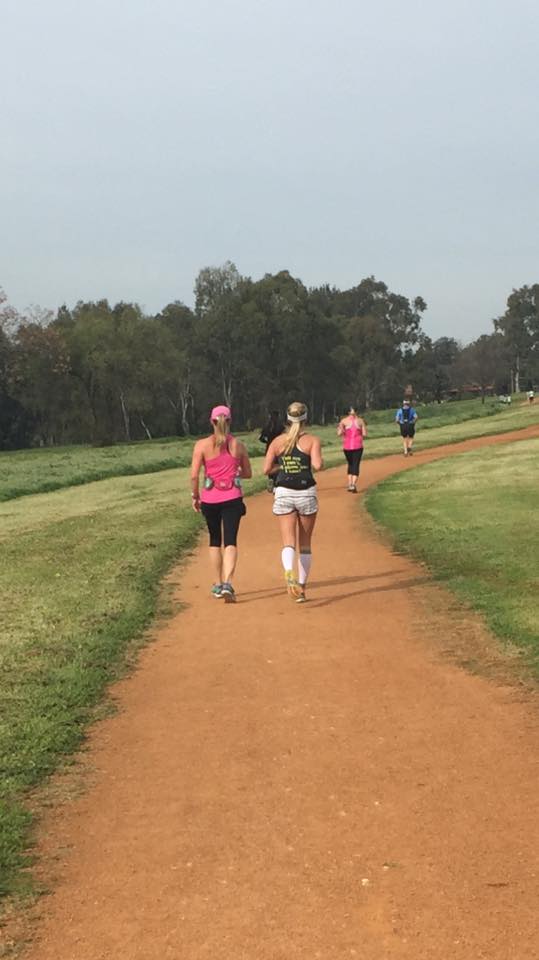 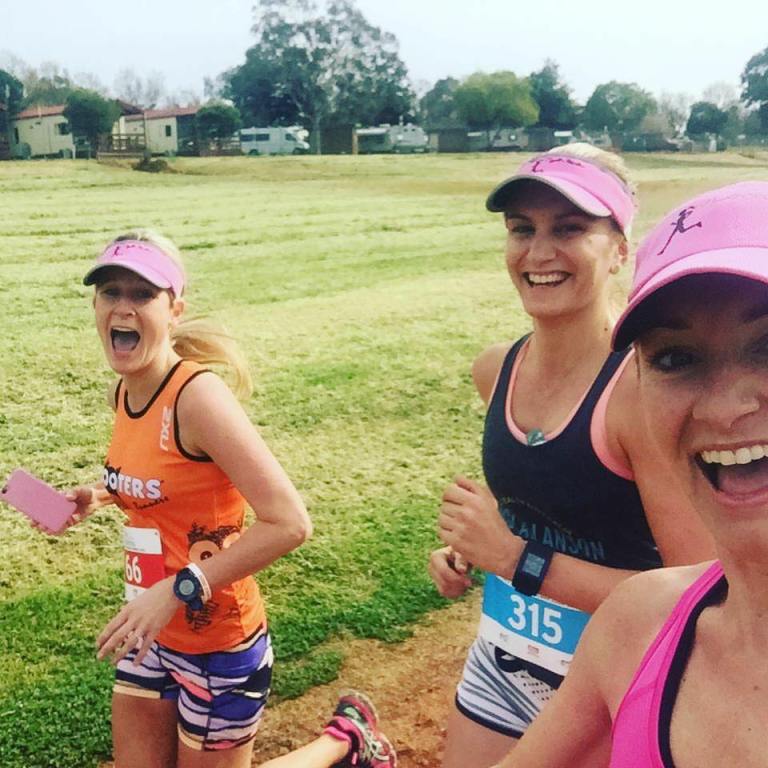 I kept going, keen to finish the second lap and get started on the third.

By the end of the second lap, I was still in second place. I took another poptop and another wristband. I felt like I was fading hard, but checked my watch and the pace read 4:45 so I was still going ok. I drank all the Gatorade in 2 or 3 big gulps and kept running. By now, the leading girl was long out of sight. The half marathoners had all turned into the Zoo, so there was no company there either.

By the time I made it to the hairpin out and back section, the lead girl was too far ahead for me to work out her lead, but I estimated at least 3 minutes. She had made up more time on the last lap. I was still running consistently, but It was not getting me anywhere. I was actually feeling pretty good though (despite starting to slow) and was really enjoying the run.

By 33km I was definitely fading, with the last 3 km all over 5 minutes. Kilometre 37 was the slowest, at 5:12. I remembered that there was a little bit of prizemoney on this race, with 1st place taking home $1000, and 2nd netting $500. “Five Hundred Bucks, Hell Yeah!” I thought to myself. “And a baby Rhino!” This weekend was about to pay for itself.

The course continued around the river. I was counting the K’s. “Just a parkrun to go” I told myself.

With 3km to go, I looked up ahead and saw the leading girl in the distance. I thought to myself that the might be fading, or relaxing, knowing the end was so close. I did not think I would be able to catch her in 3km, but I was about to run through a drink station, so I decided to have another gel. I never have a gel with only 3km to go, but today I wanted to give myself a chance. If I continued to fade, I would not have that chance.

A few minutes later, I thought I was slowly gaining on her, but couldn’t really tell. At this point, I actually wished that the race was about 10km longer, because I thought the extra distance would improve my chances. If I could catch her, my prizemoney would go from $500 to $1000. I told myself, “you just have to do 10 minutes of hard work, and you’ll get a $500 bonus. That’s a pretty good deal!” I willed my body to co-operate.

I didn’t want to put in too much energy and catch her too quickly, because if she then reacted, I would have no energy left to go with her. So I continued to reel her in slowly, and soon I was right behind her.

I tried to put in a bit of a kick, unsure if she had anything left to come with me. She let me pass and didn’t pick up speed. I tried to make a gap. We were just outside the zoo, with just over a kilometre to go.

I looked at my watch 4:40 pace. I had no idea what time I was on track for, and to be honest I did not even care. I was winning. There was a bike rider there to ride with the leading man and woman. He led me around the course.

It is one of the worst last kilometres of any marathon I have ever run. It weaves around the zoo carpark, and it felt like it was never going to end.

I glanced behind me, and could not see her in sight.

200m left the biker told me. I could hear Mossy and Robbo on the mic, announcing that the first girl in the marathon was about to come home, and then they called my name! I surged down the chute, throwing my hands in the air! It was a great feeling.

Afterwards, Jacci, Mim and I headed to the pub for some chicken wings before seeking out Dubbo’s largest coffees for the drive home.

Amongst my haul, I won a family pass to the Zoo, so I guess we will all be coming out here on a weekend in the near future so we can take advantage of that.

4 thoughts on “What Happens When You Don’t Give Up, and Give Yourself a Chance (The Dubbo Marathon 2015)”